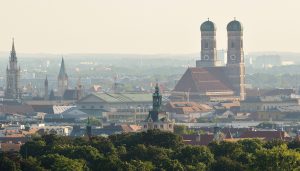 Munich, the capital of Bavaria, Germany’s southernmost state, is located in a superb landscape on the northern edge of the Alps. If you consider to travel to Munich you will find some more information and insider-tips for your sightseeing tour below. About the weather in Munich: The winters are often cold, however temperatures below -20°C are rare. During summer it is quite warm with temperatures up to 35°C. This makes the southern part of Bavaria one of the warmest regions in Germany.